Archinect Survey Results: Did the Architecture Community Return to the Office this Summer?

By: Alexander Walter, Archinect Editorial & Production Manager
Retrieved from: Archinect Survey Results: Did the Architecture Community Return to the Office this Summer? 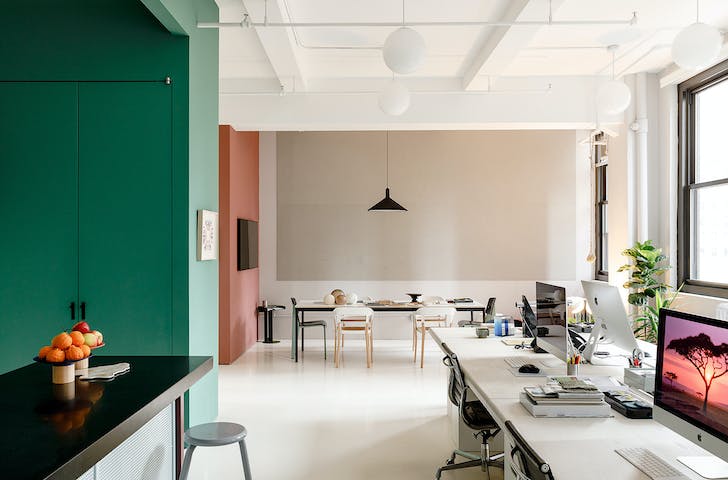 As we enter the 19th month of this COVID-19 pandemic, it seems that the only certainty we have gained so far is that nothing is certain. Earlier this year, as vaccine protection became increasingly available for the United States, we asked the architecture and design community about their return to office plans, and the survey results published in March reflected notions of transition, flexibility, and a justified hope for a return to normalcy.

To follow up on these initial responses, we reached out to our readers again to see how the expansion of the vaccine program and the emergence of the Delta variant virus in recent months have shaped the working conditions for millions of architecture and design professionals.

We received survey responses primarily from participants in large to mid-size cities in the United States, while 12.1% came from abroad, adding an international perspective to the data sample.

Asked about the size of the architectural firm respondents worked at, the split was surprisingly even with 28.2% working at small firms with less than 10 people, 37.4% at medium-size practices with 10 to 49 team members, and 34.4% working at large companies with more than 50 employees.

At 64.1%, the vast majority of participants described their role at the firm as architectural staff, while 19.1% were principals or firm owners, and 2.3% interns. 14.5% of respondents held other staff positions.

The residential design sector was represented with 26% among respondents, followed by those specializing in workplace, healthcare, education, and retail design. All other sectors made up around 35%.

Have you returned to the office?

Of those who participated, 29% reported that they had returned to in-person work following their firm’s requirement to work at the office, while 15.3% were still working remotely because their offices had not yet re-opened. Of the 38.9% who had been given a choice, 22.1% had chosen to work both at the office and remotely, 15.3% continued working remotely, and only 4.6% preferred working at the office.

Some offices reported that they had established new schedules that required employees to work certain days in the office and others remotely. Other firms had given up physical office spaces altogether and moved to an all-remote workforce. Certain employees at large companies with multiple offices reported that each office had different requirements based on local conditions.

We learned that some workers had challenged their employer’s requirements for personal exceptions — applying to both remote as well as in-office situations.

Participants responding from outside of the United States all reported that their work remained remote, or at least optional to come in, with the exception of Japan where in-person work remained mandatory.

Some workers had challenged their employer’s requirements for personal exceptions — applying to both remote as well as in-office situations.

Longtime Archinect reader, contributor, and podcast co-host Donna Sink shared: “We (130-person, 5-office non-profit) were supposed to go back to office 3 days per week after Labor Day. Three weeks ago the Board came down with a new message: back to office is now delayed indefinitely. That said, I’m going in some days and staying home some days, as is the rest of my small local team. I’m still doing site visits in person, and about half of my meetings are online, the other half in person.”

Chad Miller responded: “We were only out of the office for two weeks. Thanks to our ability to be stay 6′ away from each other, combined with Colorado’s Five Star program we didn’t have to stay remote long.”

Josh Mings wrote: “During the summer case lull we were going to end up with a hybrid half office in M-T, other half W-Th, everyone home Friday system starting around this time. Needless to say, only a couple of us are in the office on a regular basis at the moment, and a few others come in occasionally. We have the technology as they say to make remote work actually work, and the mindset as a firm to make it work, so it’s working. Therefore, no real rush, come back when you’re comfortable type thing.“

If your office has re-opened, what changes, if any, have been implemented due to COVID?

Common changes and new health measures among the firms that had re-opened their offices were HVAC filtration systems, space dividers, physical distancing, daily health checks, vaccination requirements to work in the office, weekly COVID testing for unvaccinated team members, more aggressive cleaning, sanitizing stations, and prohibiting guests from coming to the office, or requiring all guests to show proof of vaccination.

11.3% of respondents said that their workplaces had not implemented any changes, in some cases due to a 100% vaccination rate among team members. While many firms required their staff to wear masks due to company or regional mandates, some readers indicated that masks were originally required but, over time, slowly forgotten or ignored.

Does working in the office, with your staff, feel safe and comfortable right now?

When asked about the overall feeling of safety and comfort, the overwhelming majority, 54.3%, approved of the current situation. However, more than a quarter of the respondents, 26.4%, said that they did not feel safe and comfortable.

At nearly 20%, the size of the remaining group is significant. Responses ranged from simply “not currently working in the office” to more nuanced experiences, including “Safe enough, definitely not comfortable,” “Yes, except for being asked to be in a small conference room w/ others,” to “It only feels safe if there continues to be a minimal number of people in the office at any one day.”

We also learned about intended gradual re-openings that were reversed or rescheduled due to the Delta surge: “We had planned to start back in office 3 days per week in August — this got delayed with Covid Delta variant surge,” shared one principal or firm owner of a medium-sized practice.

January’s responses to a similar question showed a higher percentage of “Yes” answers at almost 60%, while around 40% said that they did not feel safe and comfortable returning to the office.

How has your company changed from pre-pandemic to now?

Surveying how companies and office culture have changed during the pandemic, many participants reported greater flexibility with working hours and working-from-home arrangements.

Responses ranged greatly from perspectives of hope and improvement all the way to negative and regressive perceptions.

A decline in company culture, less socialization among team members, and the end of happy hours and office events were common complaints.

Among the positive responses, respondents saw their teams more connected and felt that utilization was at an all-time high. Others reported increased efficiency with more projects and less staff as well as a clear commitment to making remote work part of the business plan for the foreseeable future. Some felt that the atmosphere between employees had gotten friendlier and that the company was putting more emphasis on employee wellness.

Respondents who noticed a negative trend in their company complained about layoffs, staff shortages, and employees quitting due to poor pandemic management and/or return-to-office requirements. One person in California shared their frustration with the firm’s disregard for employee health, the short notice for mandatory return to the office, and how concerns over the Delta variant were not given any attention by the management. Another participant admitted that the situation had gotten so toxic that they decided to leave the company. Others reported that more people were studying for license exams now, but that not too many were passing them.

A decline in company culture, less socialization among team members, and the end of happy hours and office events were common complaints.

What have we learned?

Summarizing the results, it becomes clear that workplace conditions still vary drastically based on local health requirements, management’s desire to balance novel technological possibilities with conventional in-person attendance, and the power of employees to make their voices heard.

With no sudden end of this pandemic in sight, further surveys may be necessary to detect a long-term, post-COVID sweet spot of remote and in-person work that will determine architectural office culture for years to come.